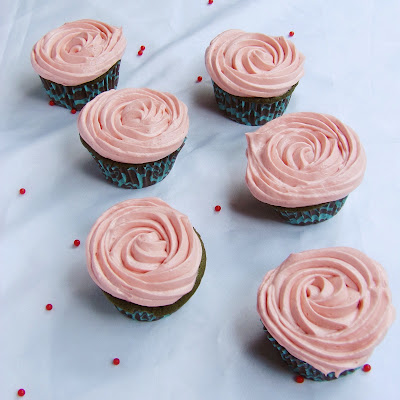 My sister’s wedding is nearing and this is the second time I was able to make another wedding favor prototype.  Since the wedding’s theme were pink and mint green, I decided to make some Green Velvet Cupcakes and frost it with German Cream Cheese Buttercream Frosting.

After some weeks of preparing by watching youtube video demos, its time to face one of the toughest battle of my life, frosting.  I decided to make the simplest piping design, the rosette style of frosting.  I have been looking for the Wilton 1M piping tube for some time now and I was not able to find one.  I asked the good Mr. Google the equivalent piping tip of 1M and he gave me piping tip #826.

I called several baking supply stores and found none.  I’ve been looking from different stores which I really have to travel far and failed to notice this small baking supply store at Megamall.  Imagine, everyday I went off to this mall after work and Cooks Exchange does not crossed my mind.  I called there shop and luckily they have this #826 piping tip and so, my frosting battle begins.

I used the recipe of Georgetown Red Velvet Cupcake found in youtube but decided to tweak the recipe to lessen the sweetness and add more moistness to the cupcake.  The original recipe calls for 1 3/4 cups of sugar which I decided to reduced to 1 1/2 cup, and maybe reduce to further in my next attempt.  Also, instead of 1 teaspoon of baking soda, I used 1 1/2 teaspoons which I should have stick to 1 teaspoon.  I also used 3 tablespoons of cocoa powder instead of 2 1/2 tablespoons and maybe I should reduce the cocoa powder or remove it totally as it affects my apple green food color.

For the German style cream cheese buttercream frosting, I found the recipe on the net and added some drops of red food color to achieve a pink colored shade and maybe I should have added some lemon zest to add some refreshing flavor to the German Cream Cheese Buttercream Frosting.

Lastly, I faced my frosting battle and decided to practice more but it did not turn out to be a disaster.  I reserved one sample of cupcake with frosting on it and placed it in our ding table just to see how long will the frosting holds.  It’s great that the wedding is on December and its cold season here.  I would worry less making this kind of frosting in that time of the year. 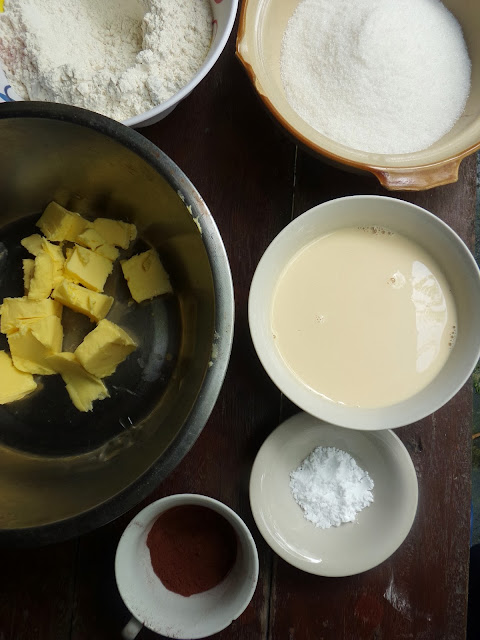 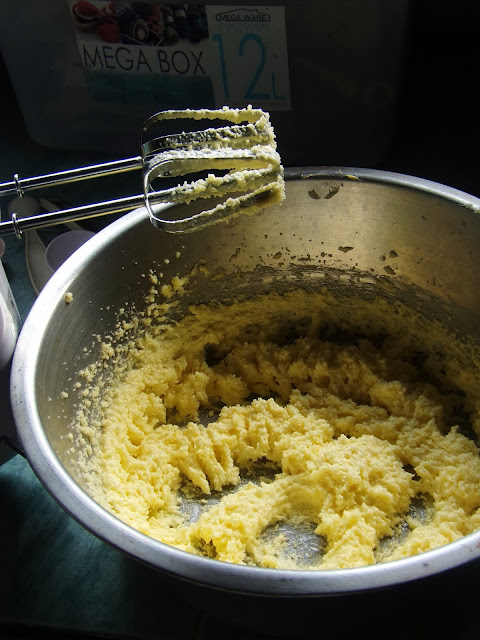 Preheat oven to 180 degrees Celsius.  Cream butter and sugar for 3 to 5 minutes at medium speed. 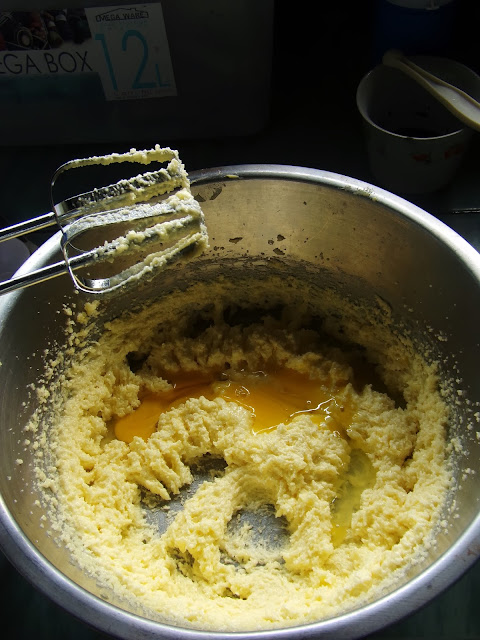 Add eggs one at time at low speed. 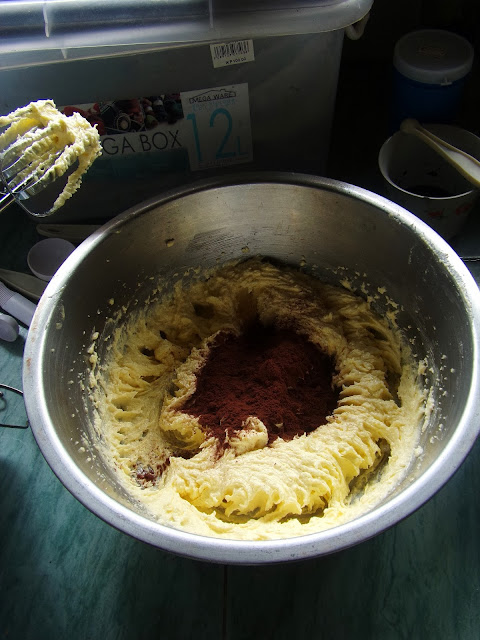 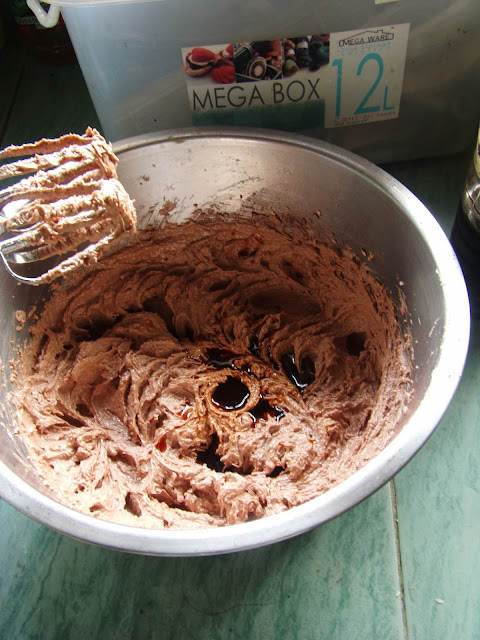 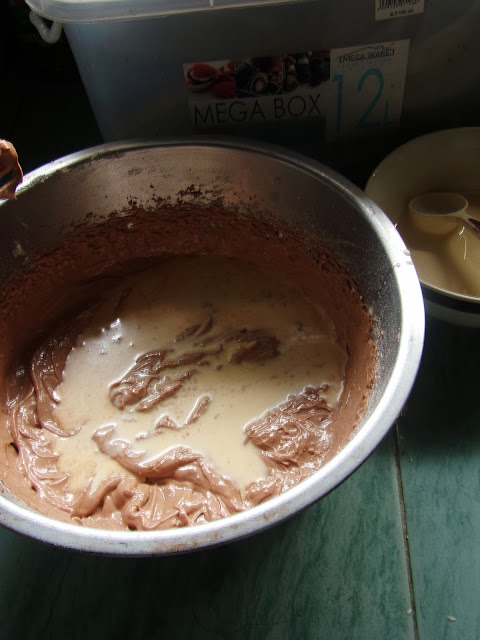 Add the milk and flour alternately adding 1/3 of each.  Add the colorant and ensure that the food color is evenly distributed.  We do not want an uneven cupcakes, do we?  Combine the baking soda and vinegar and add to the batter and mix for another 3 minutes at medium speed.  Using a 3 ounce ice cream scooper, add the batter into the regular size muffin pans lined with paper cups.  Give the muffin pan some few taps to release some trapped bubbles.  Bake for 20 to 22 minutes or until an inserted toothpick comes out clean.  Cool on a wire wrack until room temperature before frosting. 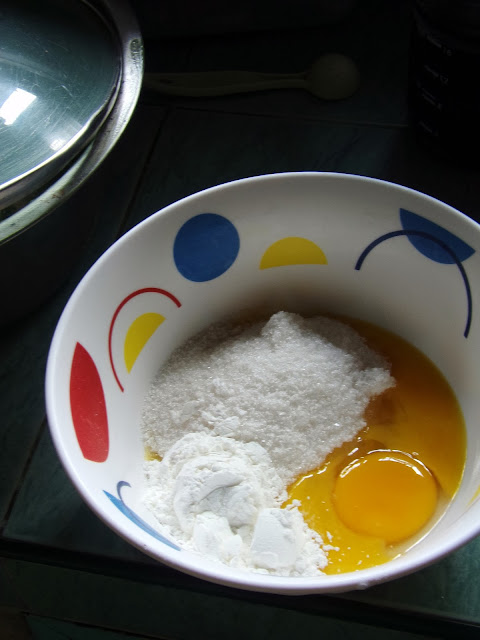 
Simmer milk for 5 minutes.  Combine sugar, cornstarch, egg and the egg yolk in a bowl and mix well.  Add half of the simmered milk into the sugar mixture and mix well.  Add the sugar and milk mixture into the remaining milk and heat until the mixture thickens.  Transfer in a bowl and cover with plastic wrap.  The plastic wrap should be touching the custard  to avoid formation of film.  Cool in the fridge or to room temperature.

When the custard is already at room temperature, beat this using a mixer or hand mixer for 1 to 2 minutes.  Add butter and cream cheese one tablespoon at a time with continuous mixing.  Add food colorant if desired.