The night before my friend’s wedding, we ate this Aristocrat’s chicken barbecue and I quickly fell in love with it.  It’s juicy, sweet and savory.  The dish is priced at Php200.00++ something and comes in three pieces cued on a stick and served with java rice and atchara or pickled green papaya.  Though the priced is that of a whole chicken, the dish is so worth it.

Since I fell in love with Aristocrat’s chicken barbecue.  I tried to imitate it and searched some recipes online.  Looking at the recipes, it’s like what my mom do to marinate her pork barbecue.  The ingredients consists of soy sauce, banana ketchup, 7Up or Sprite, calamansi juice, salt and pepper and that’s it.  Okay, the ingredients are not hard to find and it’s all available in our pantry.  I also seen some recipes suggesting making peanut sauce out of the marinade so I must try it.

However, there are some deviations in my recipe.  I used chicken wings instead of the drumstick since it’s the most flavorful part of the chicken.  I added extra brown sugar since I like the marinade more on the sweet side.  I also used light and dark soy sauce in the recipe instead of the whole dark soy sauce.  I also grated the garlic for more flavor instead of just chopping it up.  I added a fourth cup of peanut sauce into the marinade and reduced it until the consistency thickens.  I used this in the final basting of the chicken.  Instead of basting the chicken with the marinade during grilling, I simply baste it with cooking oil.  I think, basting it with the marinade while grilling will really char the chicken so a simple cooking oil will do.  When the chicken is already cooked, I basted it with the peanut barbecue sauce and grill it for another two to three minutes just to caramelized the sauce.
The result is a very flavorful chicken barbecue.  I marinate it overnight, about 12 hours, and its already flavorful.  Did I mentioned a while ago about the peanut barbecue sauce, it’s supposed to be a dipping sauce but I forgot to served it during lunch as the chicken is so tasty as is.  No need for the sauce.  However, I think if I marinate it for more than a day, other recipes called for two day marination, it will have more intense flavor.  Next time I’ll have more patience and marinate it for two days.
Ingredients
1 kilo                                             Chicken Wings


Clean chicken and pat dry.  In a separate bowl, combine 7 Up or Sprite, ketchup, calamansi juice, dark soy sauce, light soy sauce, garlic, sugar, salt and pepper.  Mix using a wire whisk until salt and sugar are dissolved.  Marinate the chicken wings into the barbecue sauce over night in the fridge.  You may also wish to marinate it longer.

Bring out the marinated chicken from the fridge at least an hour before grilling.  You may cue your chicken on a stick for easy grilling.  Grill over medium heat charcoal until cooked, roughly about 15 minutes.  Baste with cooking oil from time to time to avoid drying.  When the chicken is done, baste it with the peanut barbecue sauce and grill for another two minutes just to caramelized the peanut barbecue sauce.  I flipped the wings several time as not to avoid too much charring of the chicken wings.  Remember we marinated our chicken wings with sugar so expect too much charring if the heat is too high.

Serve with java rice and atchara. 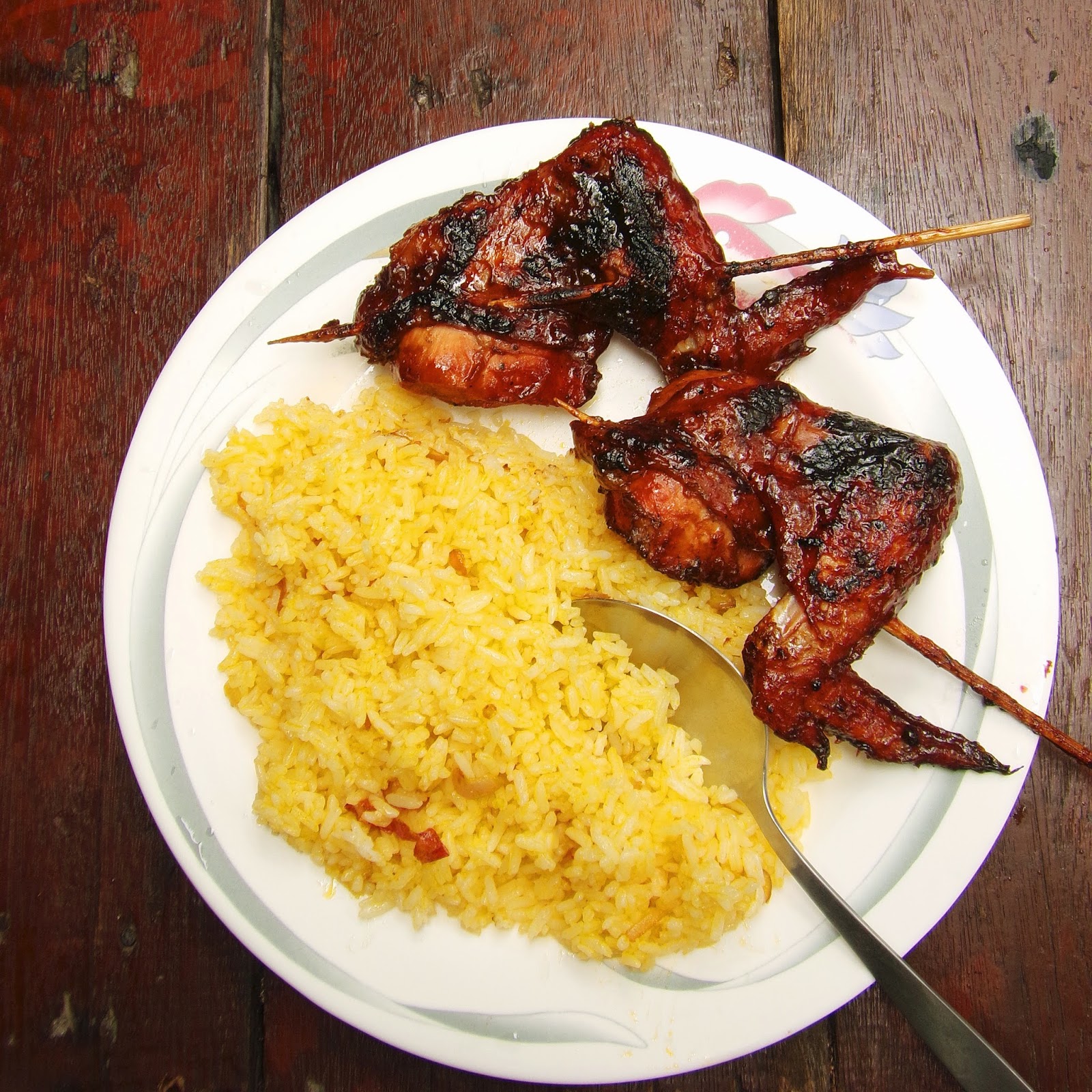