I love cinnamon.  I love when our kitchen oven emanating its lovely aroma.  It’s kind of relaxing and heavenly.  What’s the best way to serve cinnamon?  Yup!  Cinnamon roll.

I made cinnamon roll before and it requires dough filled with cinnamon sugar and baked to perfection.  Well, I’m not in the mood to knead and make my own dough.  I want a quick and easy solution to my cinnamon craving.

Then there was this loaf of bread sitting and waiting to be devoured by the most boring way possible.  So why not transform this boring loaf of bread into something exciting?  Cinnamon roll it is.

Simply flatten the sliced bread using a rolling pin.  Brush it with melted butter and spread a tablespoon of cinnamon sugar.  Roll it and arrange it in a baking pan and bake it in the oven.  Cinnamon craving solved. 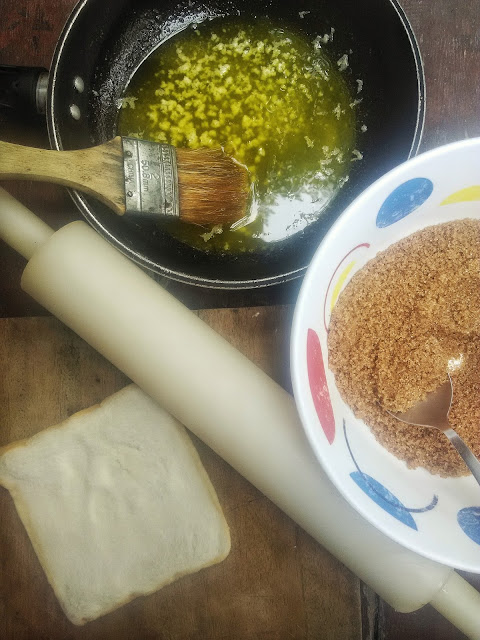 Flatten each sliced bread using a rolling.  You can remove the edges if you want but in my case I kept it as is.  I don’t want to waste a thing.  Brush with melted butter.  Add a tablspoon of the cinnamon sugar and spread evenly.

Start rolling diagonally starting from the right bottom corner.  Fold each end of the rolled bread towards the center and arrange in a baking pan.  Repeat the step with the remaining slices.

Brush the top with remaining melted butter and sprinkle with the remaining cinnamon sugar.