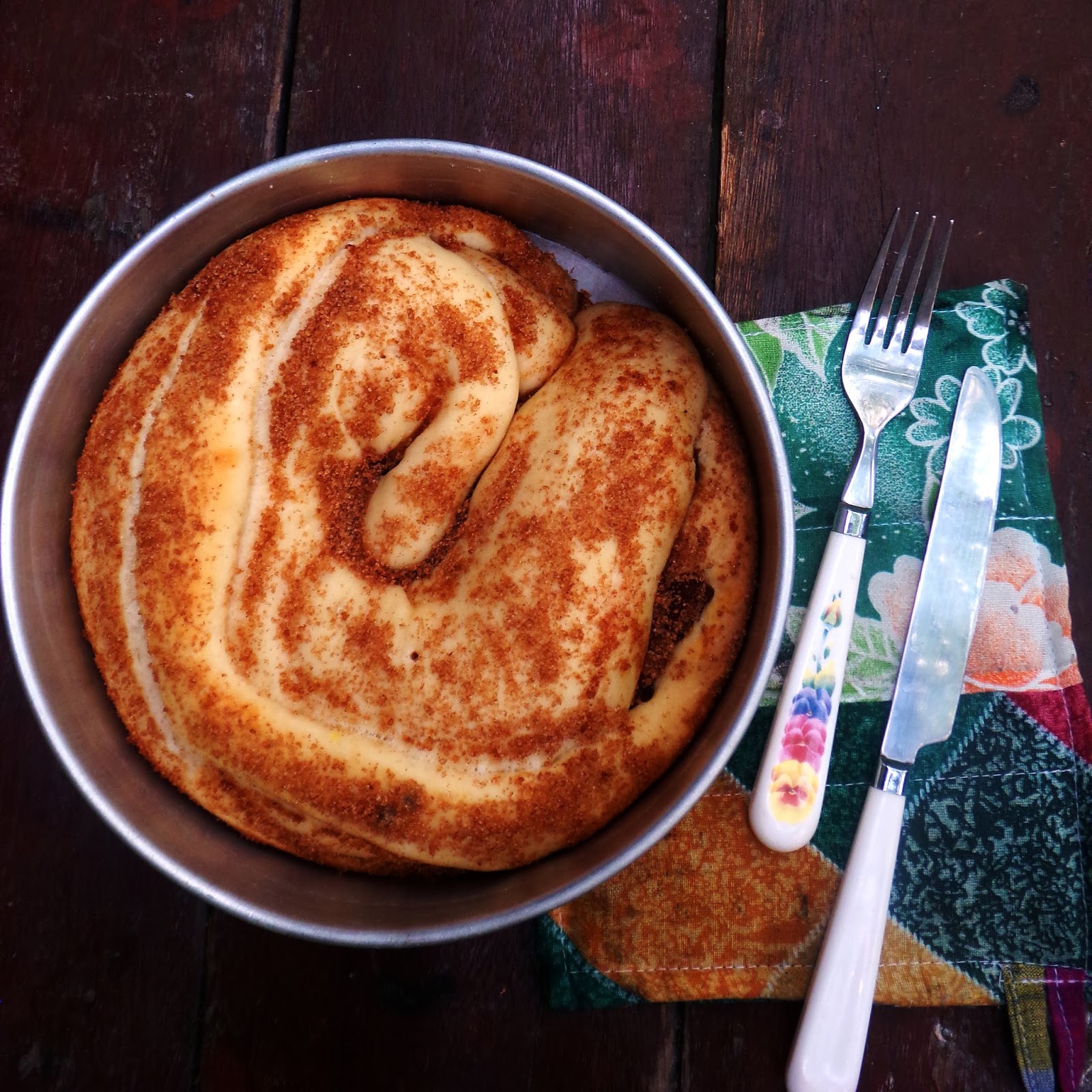 Okay!  I know I did a cinnamon roll recipe last week and you must be asking “Cinnamon Bread again?”.  But hey, I can’t get enough with this luscious piece of bread.  The lingering taste of brown sugar and cinnamon that explodes like an orchestra of flavor in my mouth is so addicting.  So, I decided to bake another round of cinnamon bread, but this time I added some chopped dates.  I wish I added more dates to this bread.

Like what I’ve said, I can’t get enough with cinnamon bread.  I decided to bake it again but I felt I need to add a twist to this bread.  Searching our fridge for that twist, I saw this tub of dates sitting in our fridge waiting to be devoured by my mom.  Yes, my loves dates so much and luckily, my sister gave her a tub of dried dates.  I patiently removes its seeds, I just hope next time she will gave pitted dates, and chopped it roughly.  Then, I added this to my cinnamon bread dough.

My parents find my cinnamon roll a bit on the sweet side and my dad has to control his sugar intake.  My dad likes my cinnamon roll but wished it has less sugar.  So I decided to reduce the brown sugar and cinnamon mixture.  Instead of rolling it with the dough, I just sprinkle about two tablespoons of brown sugar-cinnamon mixture on top.  Oh, I also just rolled the dough and baked it on a 8-inch round pan.

And there it goes again.  Our house is filled again with the seductive aroma of cinnamon.  It always makes me want to open the oven, smell the cinnamon aroma the oven is emitting and sliced a piece of the bread and enjoy it.  But ofcourse, I have to wait until the bread is done baking.  And alas!  When the timers rung, its my signal that I could eat my cinnamon bread in just few more minutes.  I just have to wait for another 10 to 15 minutes just to cool it a bit.

The 15 minute cooling period is up.  I sliced a piece of cinnamon bread and dunk it in my mouth and and savor every bite of the cinnamon bread.  My mom even complemented me that I’m improving in bread making.  I guess she liked it and I did not heard her complain on the sweetness. 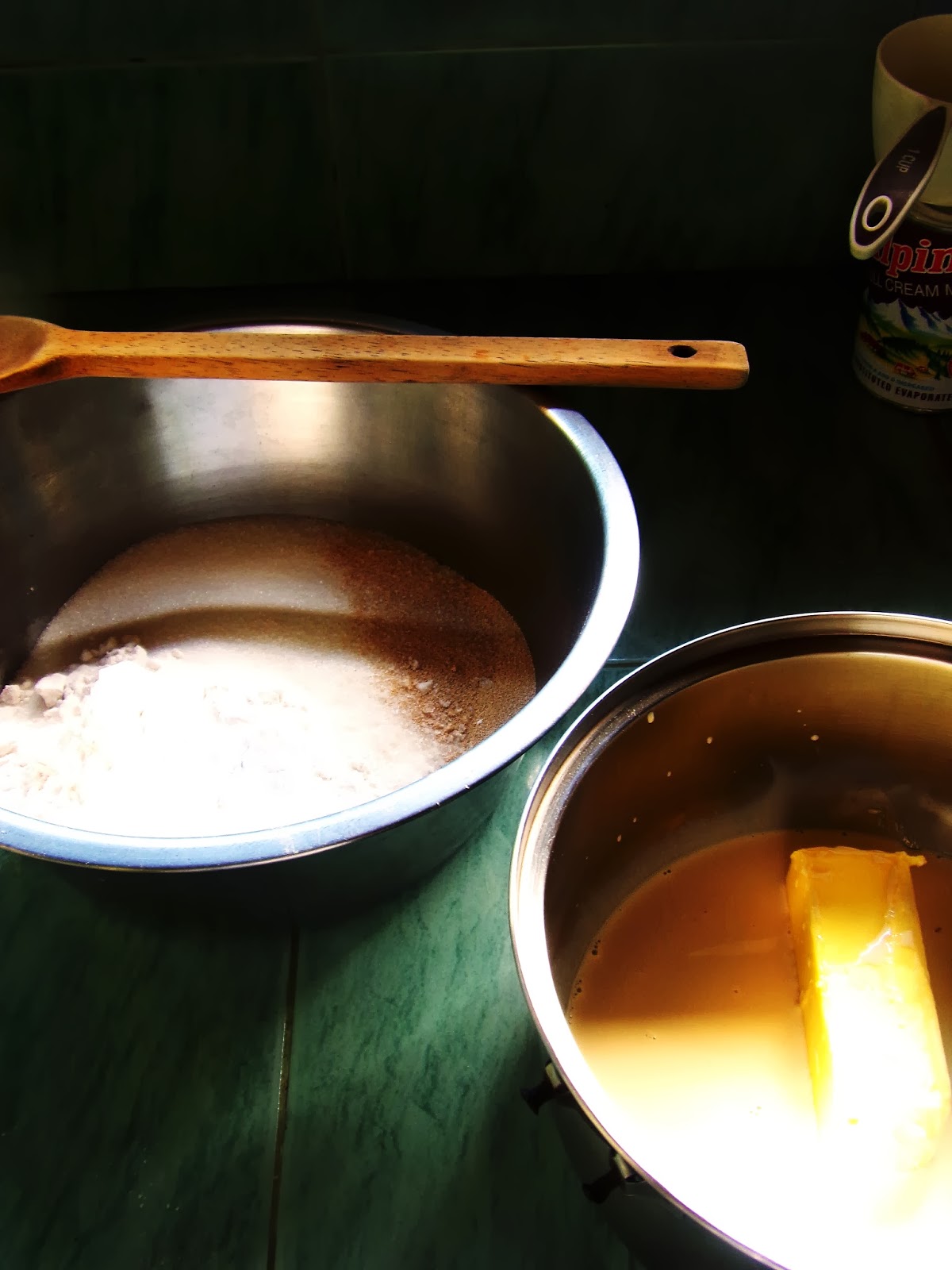 Pour the milk mixture into the flour mixture and mix.  You should have a slurry consistency batter . 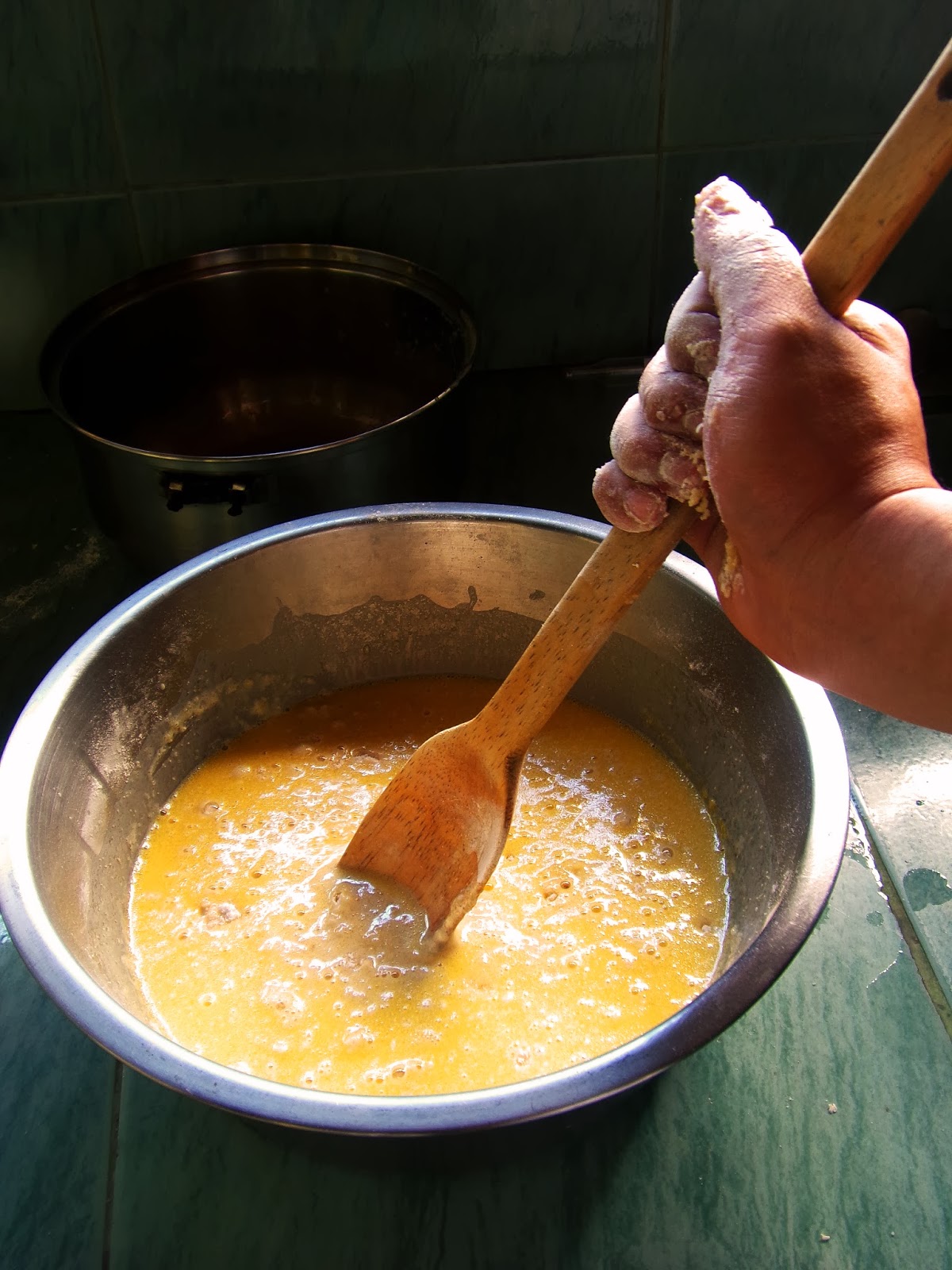 Pour 4 cups of flour, 1/2 cup at a time and mix using a wooden spoon.  Transfer the dough on a floured surface when everything comes together. 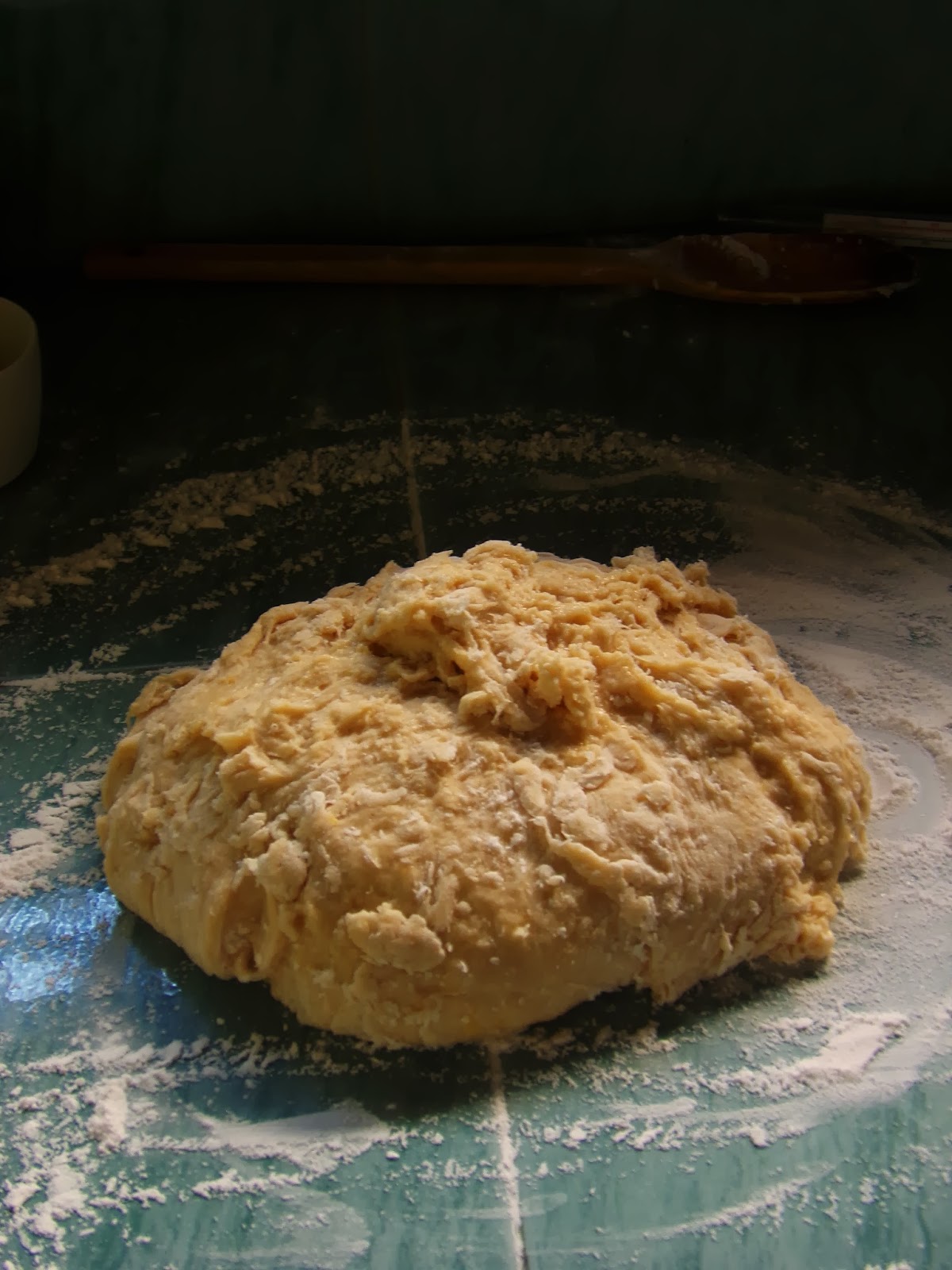 Knead for 8 to 10 minutes or until the dough is smooth and does not stick to your hands. 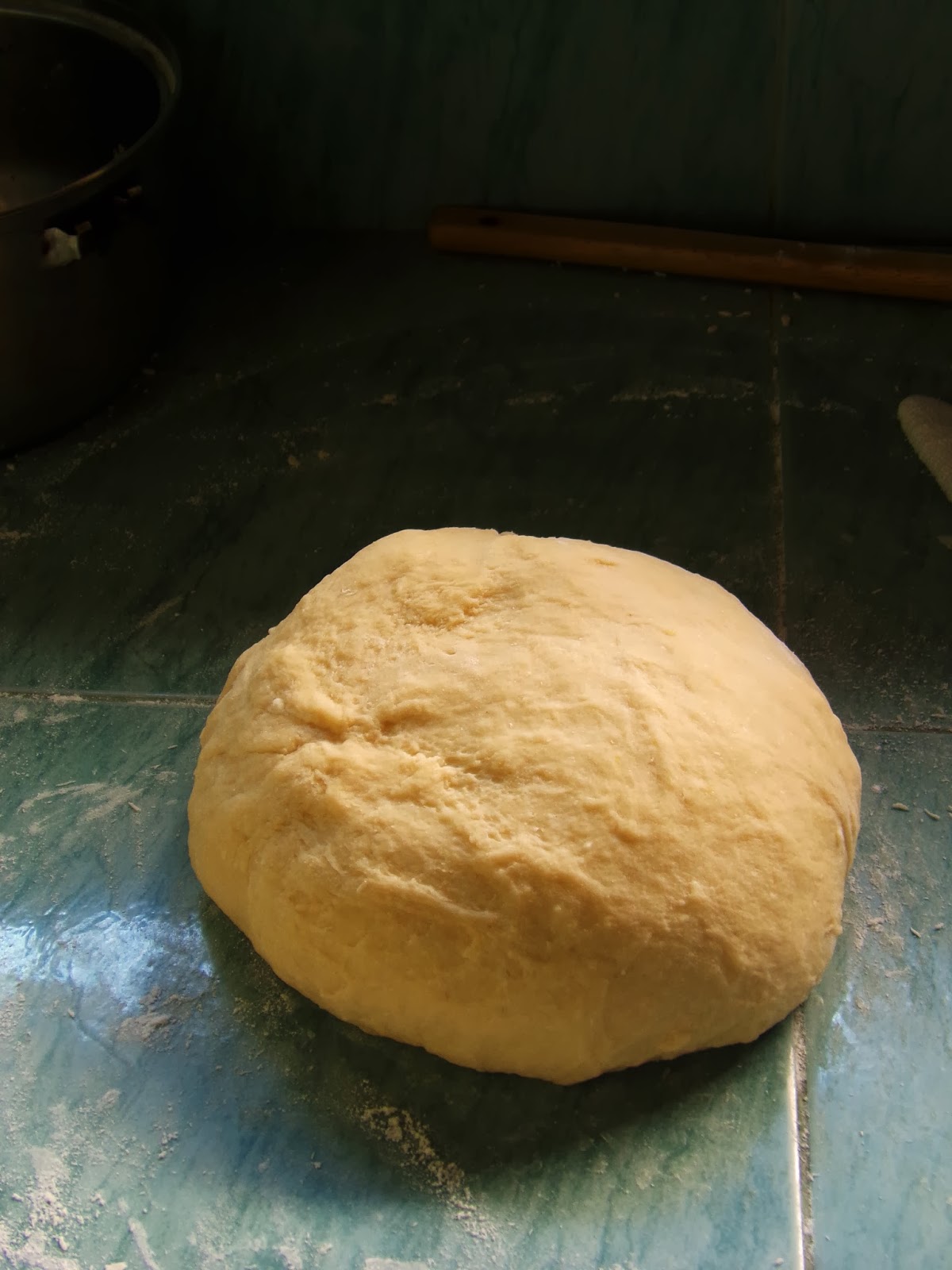 Divide the dough in to two.  Flatten each dough to 9 by 12 inches sheet.  Cut the sheet in to strips leaving atleast an inch uncut to hold the strips together.  Sprinkle half of the chopped pitted dates. 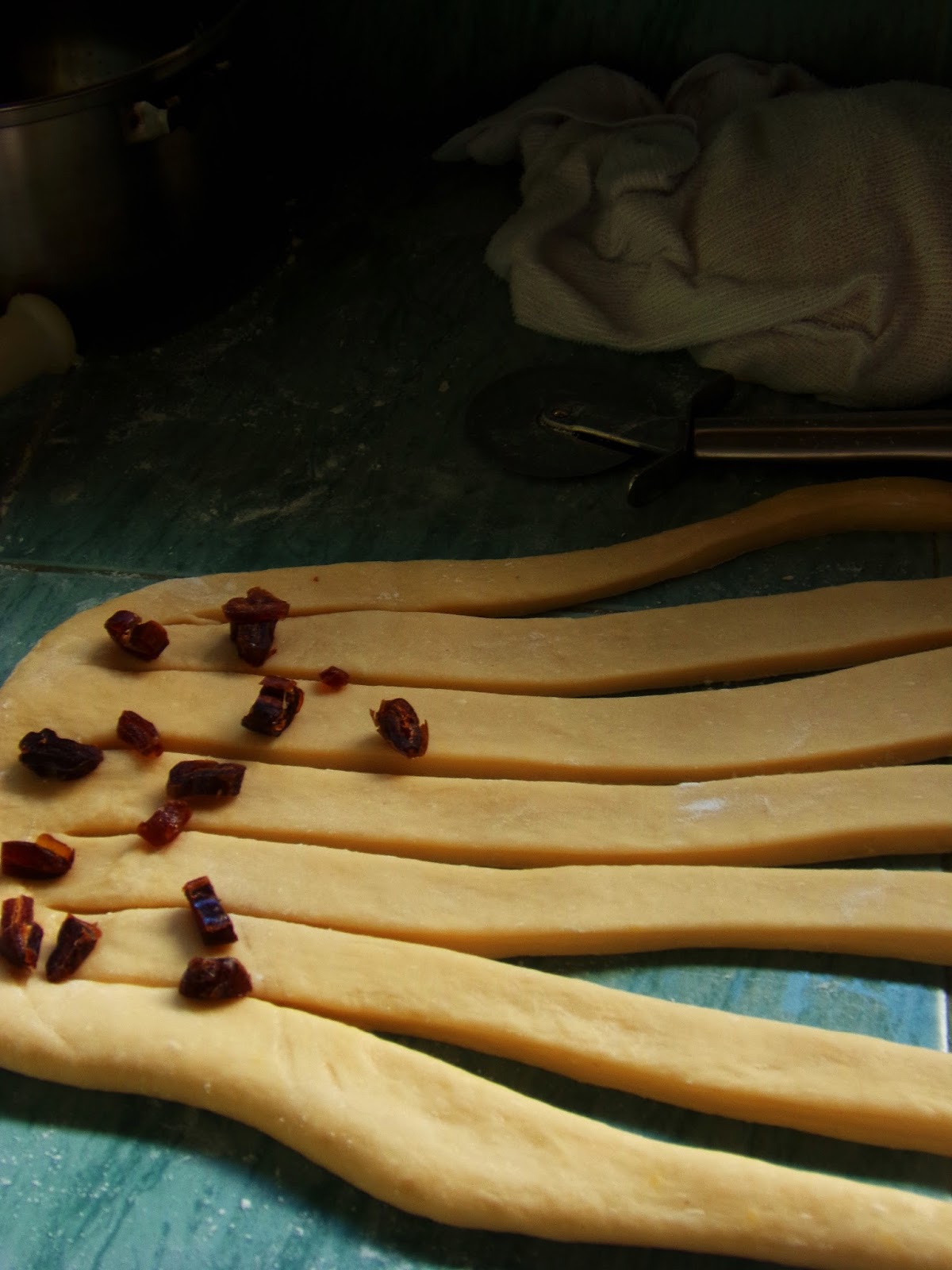 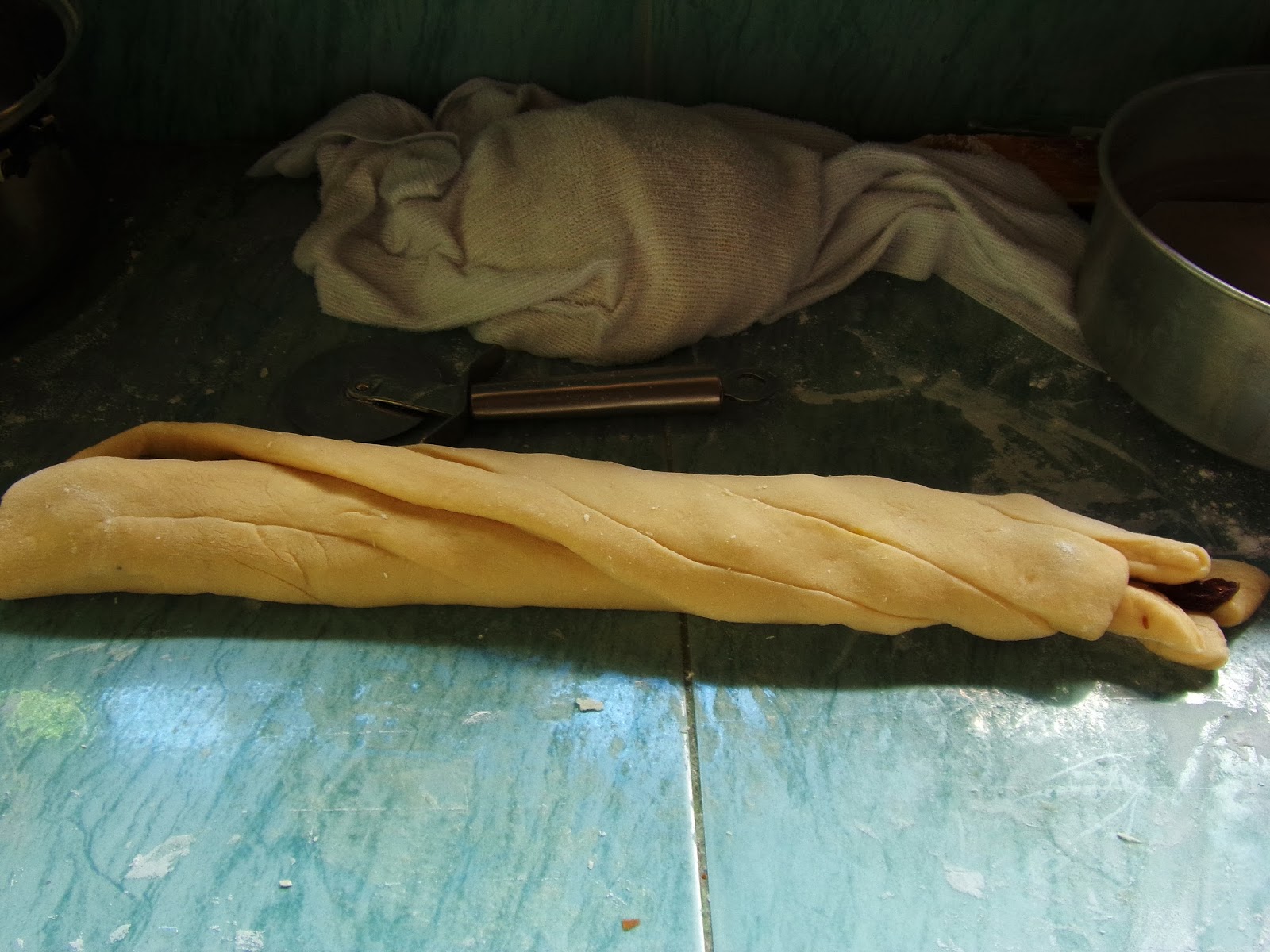 Coil the rolled dough in a 8-inch round baking pan lined with baking paper.  Mix brown sugar and cinnamon. 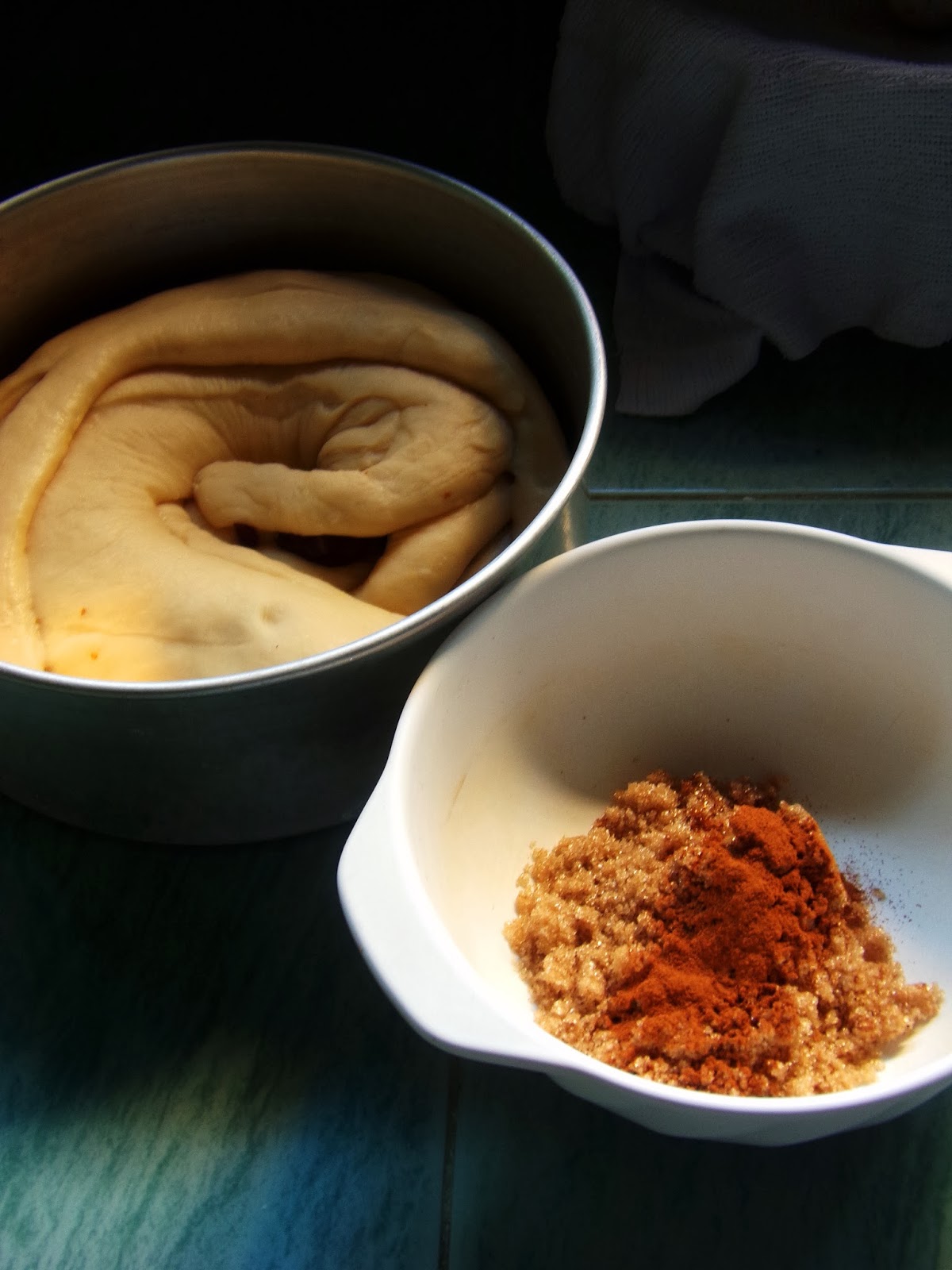 Brush the surface of the dough with melted butter and generously sprinkle the cinnamon-sugar mixture. 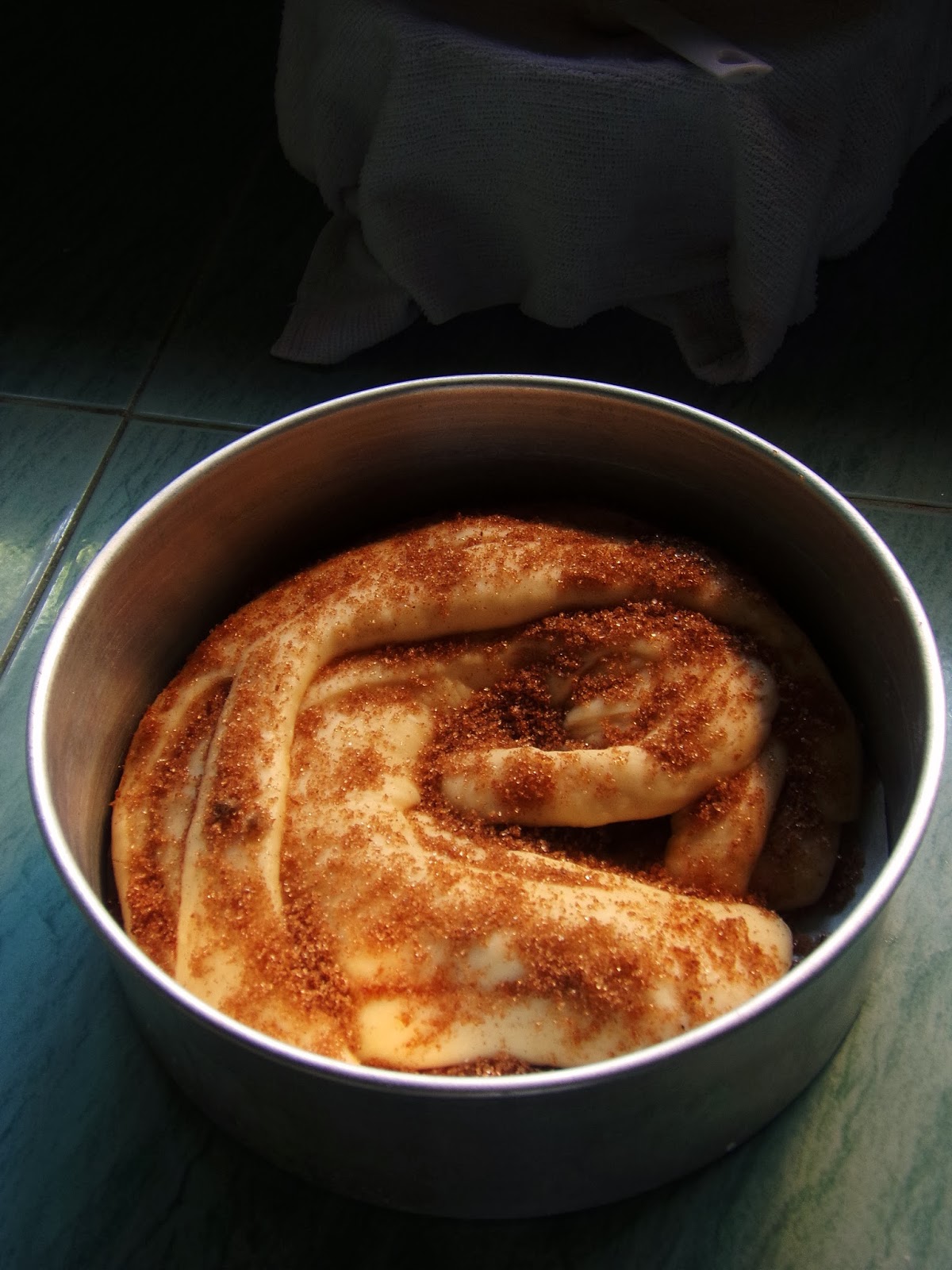 Baked for 25 minutes and served warm. 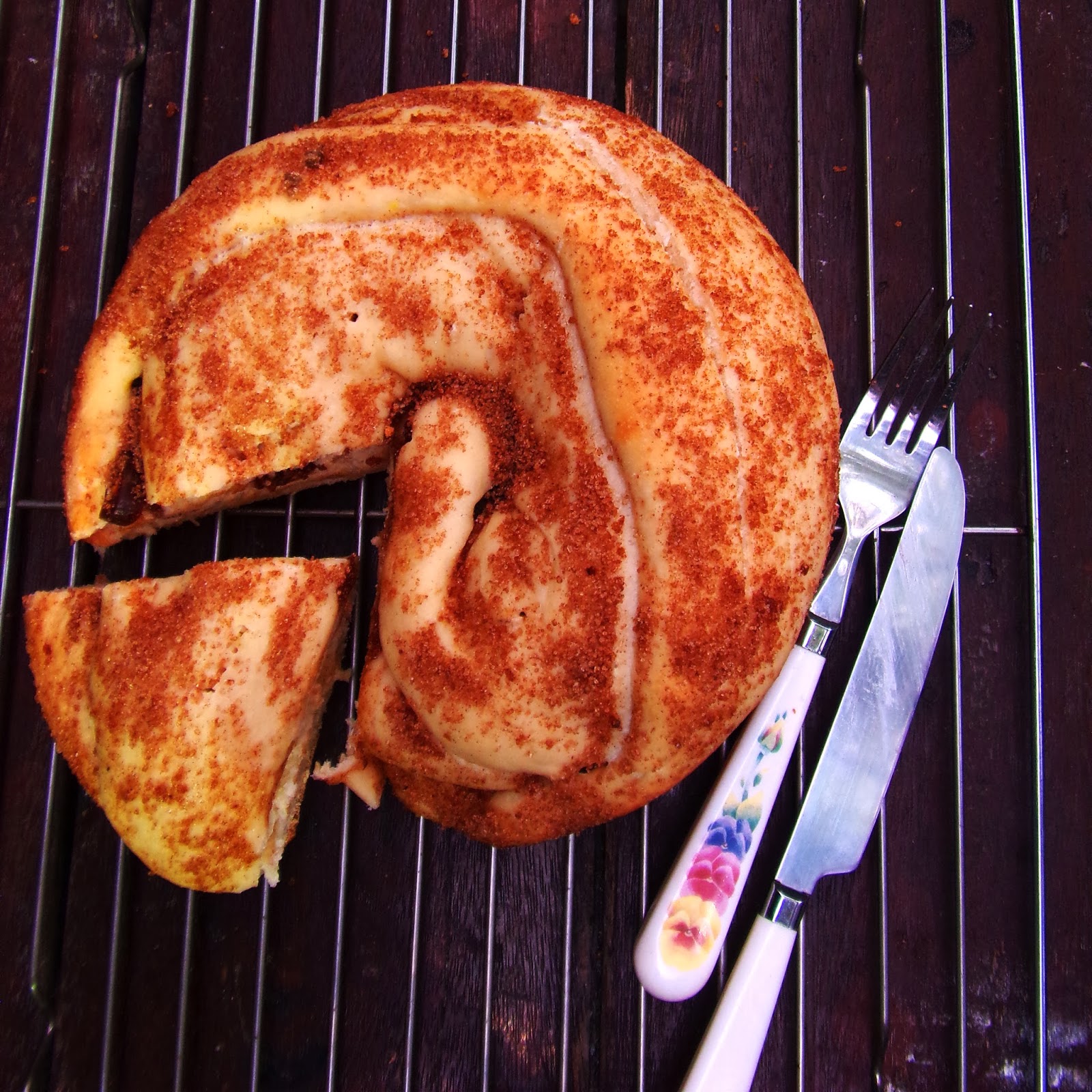