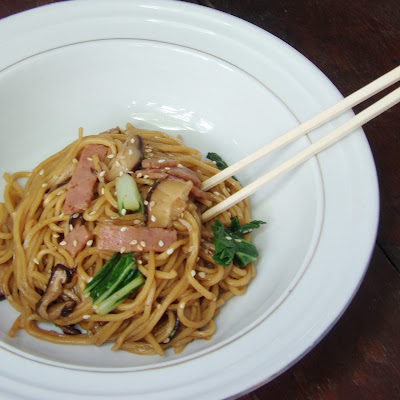 We have this saying in the Philippines during one’s birthday to eat pancit or stir fried noodles for long life (Kumain ka ng pancit para humaba ang iyong buhay.)  That’s why pancit is a common dish during birthday celebration.  Aside from the belief of life longevity, pancit is so simple to prepare.  Just stir fry everything, add the noodles and season with soy sauce and pepper.

Today is my mom’s second birthday for the year.  Second?  Well, her actual birthday is March 28 but when she was born, she was registered by my grandparents on April 28.  The result, a birth certificate bearing April 28 as her birthday.  Some weird things on the 1950’s.

My mom’s favorite dish and favorite to cook during birthdays is pancit, a Filipino stir fried noodles.  She loves pancit more than pastas (Filipino blood mode).  It is usually paired with sliced breads.  Believe me, pancit can be sandwiched between two breads or you can pair it with rice.  That’s so much carbs, but it really goes well with those carbs.

This version of stir fried noodles is more of a Yakisoba-style than the traditional Filipino-style.  For a change, let’s try something new.  Yes, you read it right, this is my first time to cook this dish since I’m not a pancit lover. 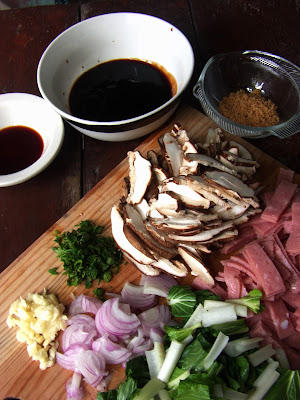 HOW DOES IT TASTE?
This stir fried noodles is sweet and savory with ham-flavored taste.  The shitake mushrooms gives this earthy flavor that compliments well with the dish. The bok choy adds this crunchy feeling to this dish.  The toasted sesame seeds not just adds aroma but also flavors to this dish.